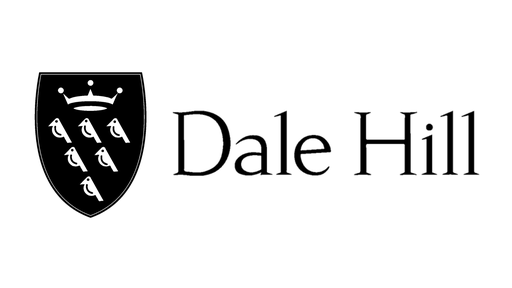 The Ian Woosnam Course was constructed in 1995 and opened in 1997. The course has gained the reputation as being one of the finest courses in the South East. Designed by the former Masters and Ryder cup Captain, the Ian Woosnam course covers nearly 200 acres of beautiful Sussex countryside.

Constructed to USGA Specifications, the greens provide excellent putting surfaces all year around.

Since 2005 Leaderboard golf has invested heavily in the drainage of the course which has seen an improvement in the general playability all year round.

The course has a par of 71 for both men and ladies and starts with a 602 yard par 5 to wet your appetite. Once reaching the 5th hole the course opens up and the views are spectacular.

The long rough positioned around the course demands accuracy off the tee and the quick greens require a steady nerve.

Please click on the individual holes to view them with a hole by hole explanation. 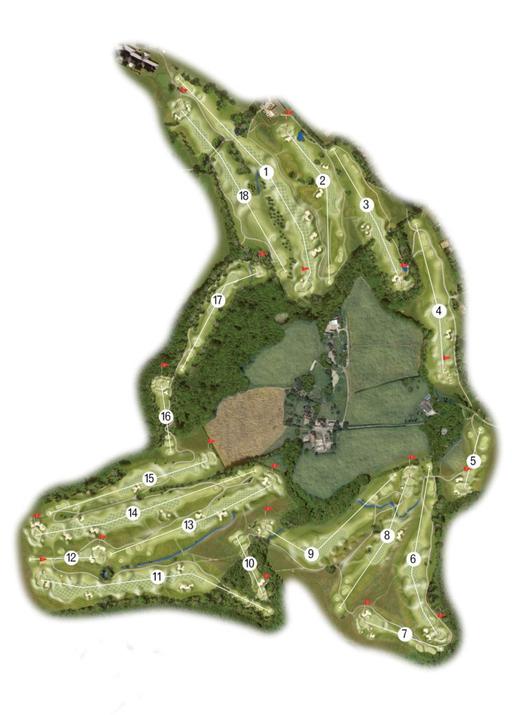 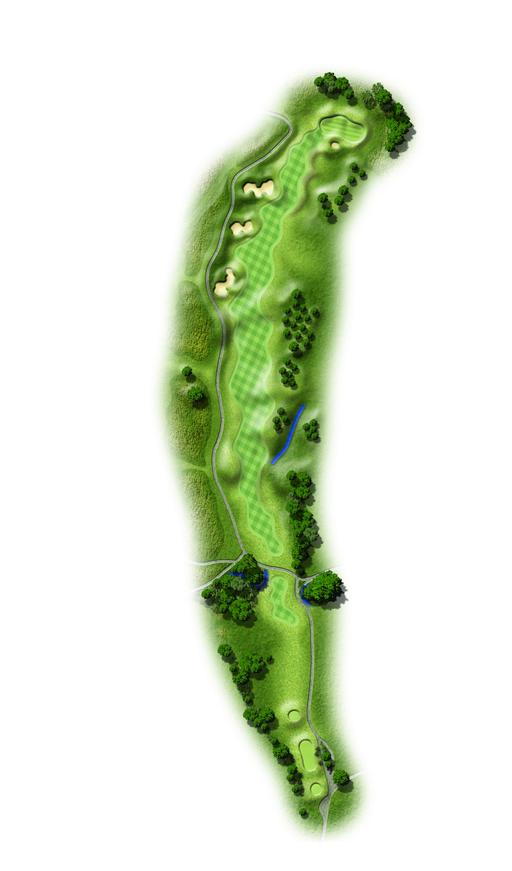 The second should favour the right side to avoid the bunkers down the left and this will leave a relatively simple approach to a wide but shallow green with a deep bunker guarding the font - check your yardage carefully, better too long than too short. 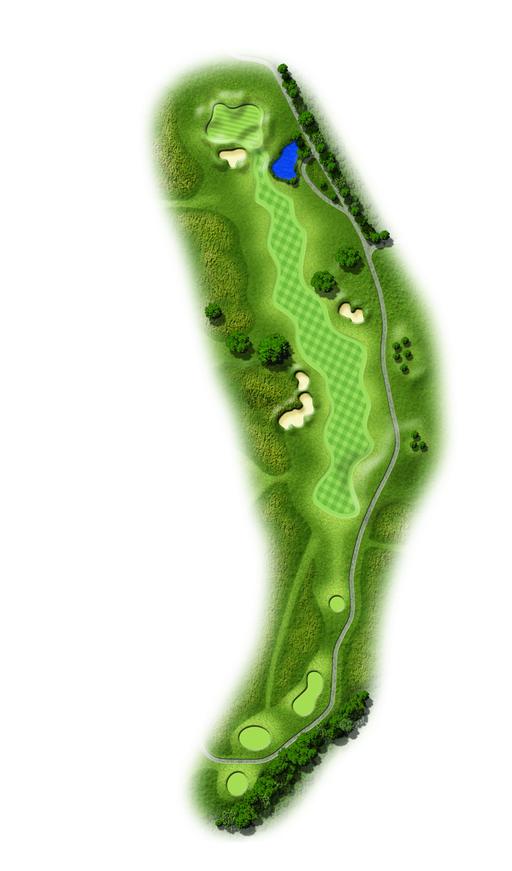 The tiger line from the tee is over the left hand bunker and between the two large trees, alternatively the 'safe line' is towards the right hand bunker.

The approach shot from the fairway should be played towards the centre of the undulating raised green, avoiding the bunker on the left and the small pond on the right. 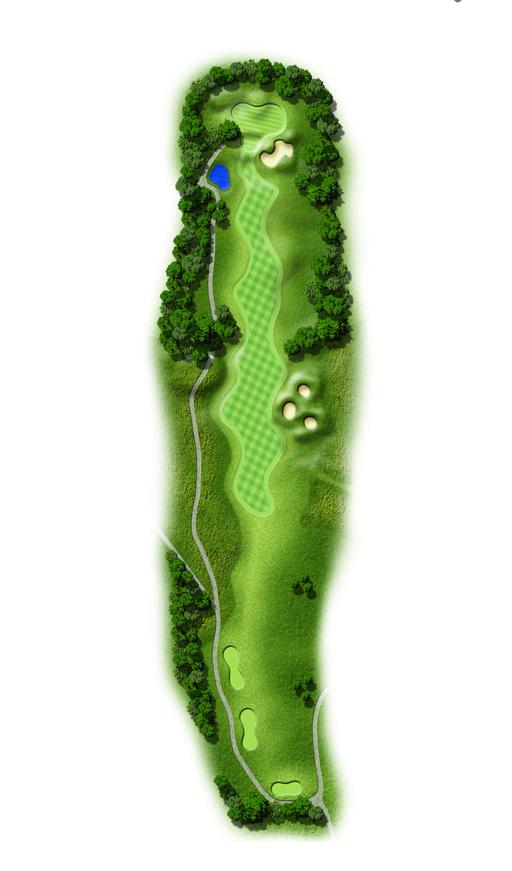 Accuracy is more important than distance on this short four.

The tee shot should favour the lfet side to avoid the bunkers on the right. Providing you take enough club the second will be fairly simple to a green that is raised and guarded by two small ponds on the left and a large bunker at the front. 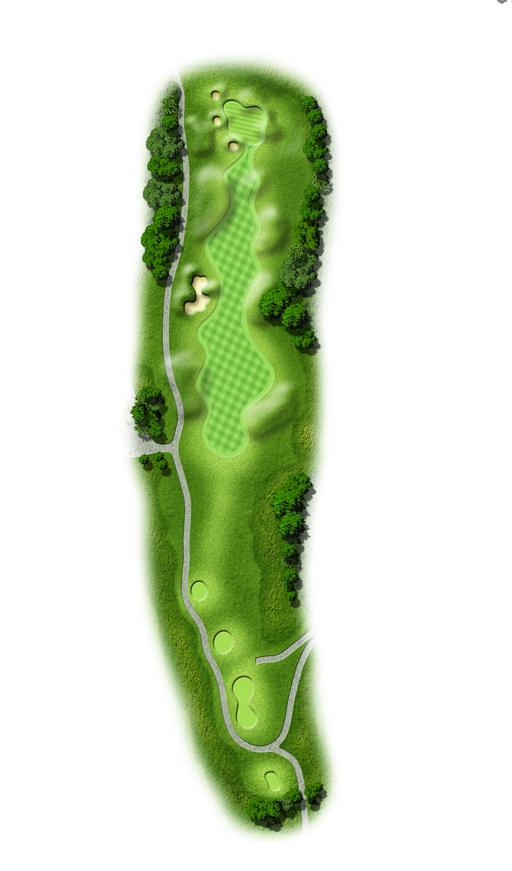 A potential birdie opportunity on this short but testing par 4.

The tee shot needs to be aimed to the right side of the fairway bunker which will leave a short approach to a fairly flat green.

Care needs to be taken on the approach making sure to avoid the trio of pot bunkers to the left. 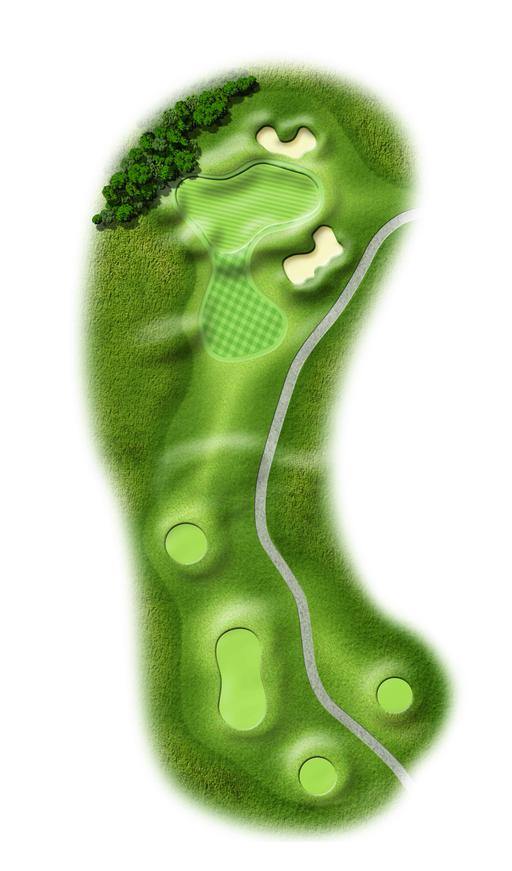 Pin placement can turn this short 3 into a golfers nightmare!

A mid or short iron played at the centre of the green avoiding the bunkers at the front and back right will give you the best chance of making a regulation par.

The green slopes from left to right. 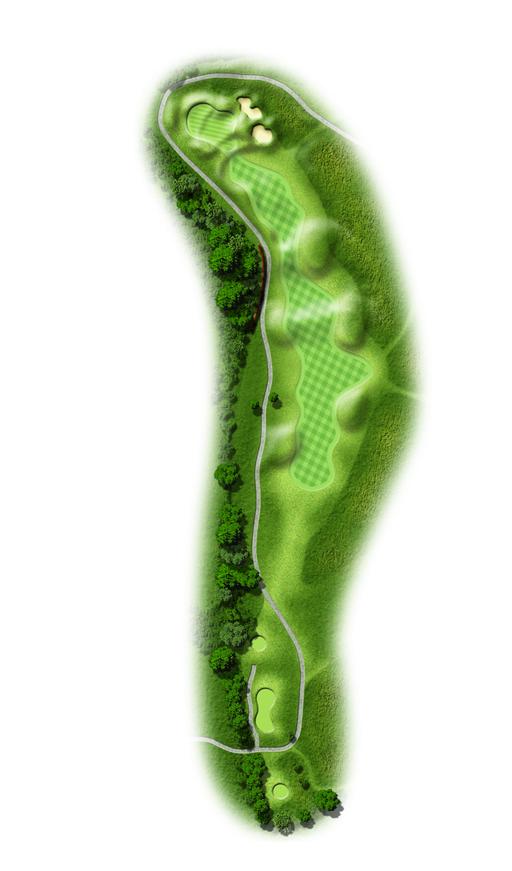 From the tee aim for the right side of the fairway to avoid the OOB and a ditch on the left on this dog-leg.

This will open up the best line to the very testing putting surface.

The downhill second should be played with care favouring the left side of the green to avoid the big bunkers on the right.

Correct club selection is essential to finish on the same tier as the pin and make putting easier. 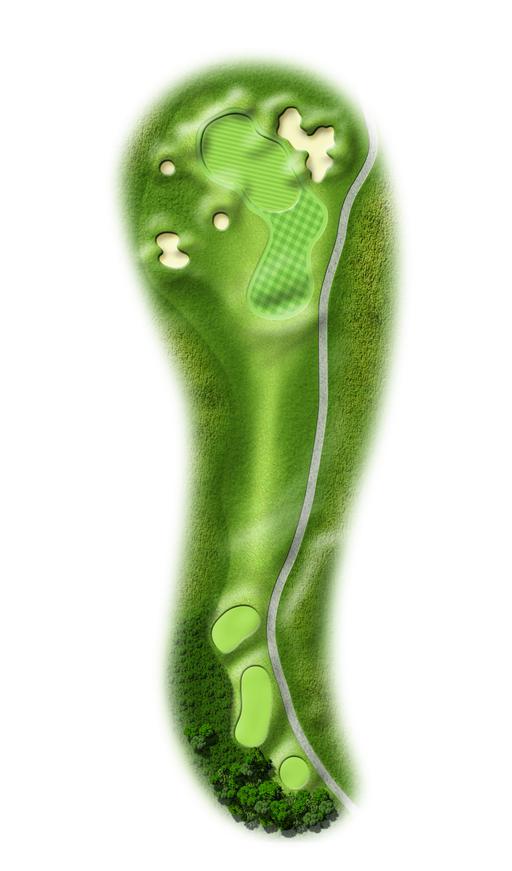 A tough long 3 that must be given your full concentration.

The tee shot is over a valley, so club selection here is important if you want to hit the green.

With bunkers guarding short left and long right, the percentage shot is to play for the centre of the green and depending on your putter for a par. 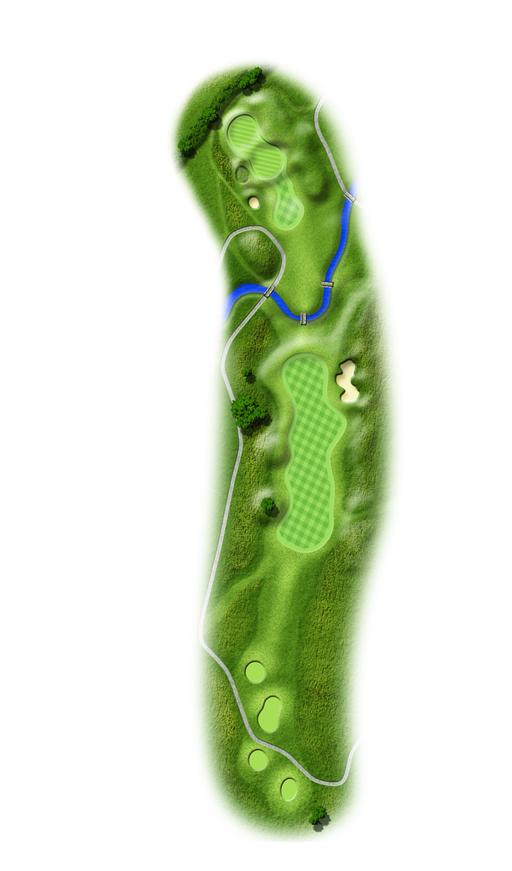 A challenging par which requires an accurate tee shot which should favour the right half of the fairway avoiding the bunker.

The second may need more club than you think as you are going over a small valley and this is especially when the pin is on the back of the green.

The percentage approach should favour the right side of the green as going left can be costly. 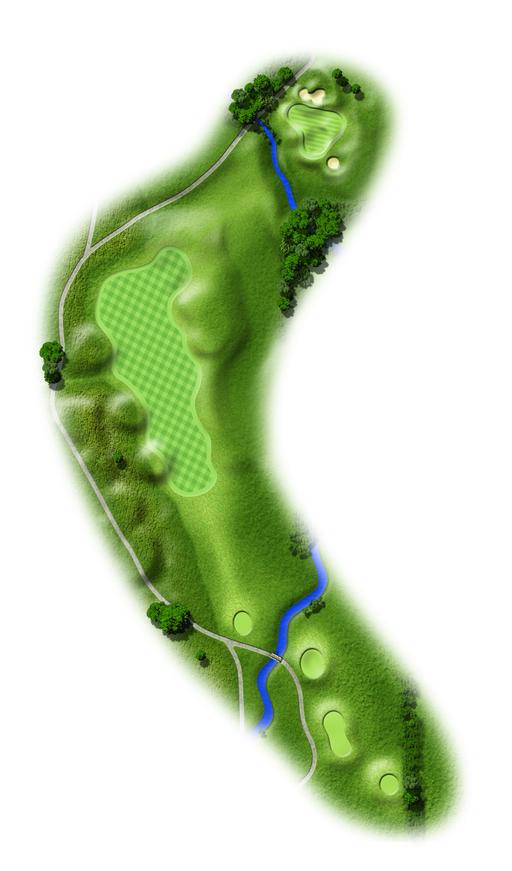 A testing left to right dogleg. Play your tee shot to favour the left side of the fairway as anything right is in trouble.

Then you have to give the approach shot your full attention as you are going downhill over water to a well protected green.

Calculate the distance carefully as many players come up short. Aim for the centre of the green and be positive. 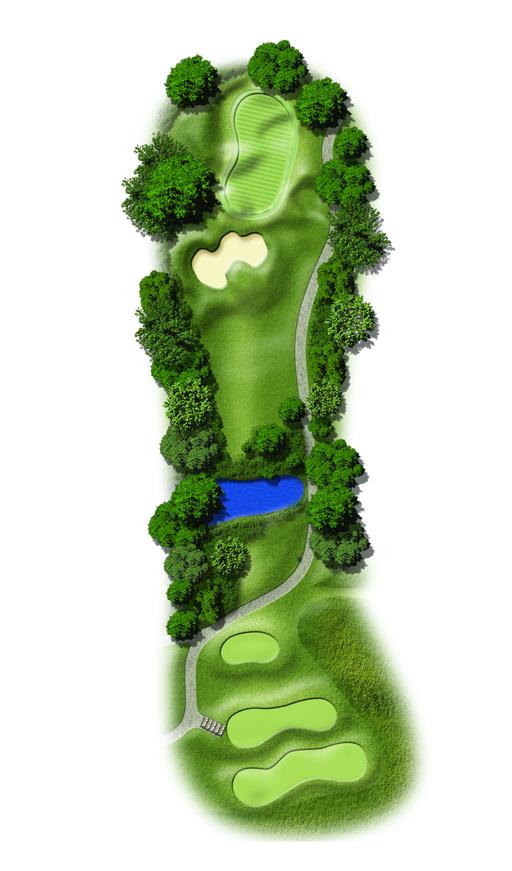 Good club selection is essential on this short hole as it is well bunkered.

The tee shot is over a watery valley so taking one club more than you think is a good approach.

The bank on the left will help any shot erring left but if you miss on the right your ball will bounce further right because of the natural contours and leave a difficult chip back to the green. 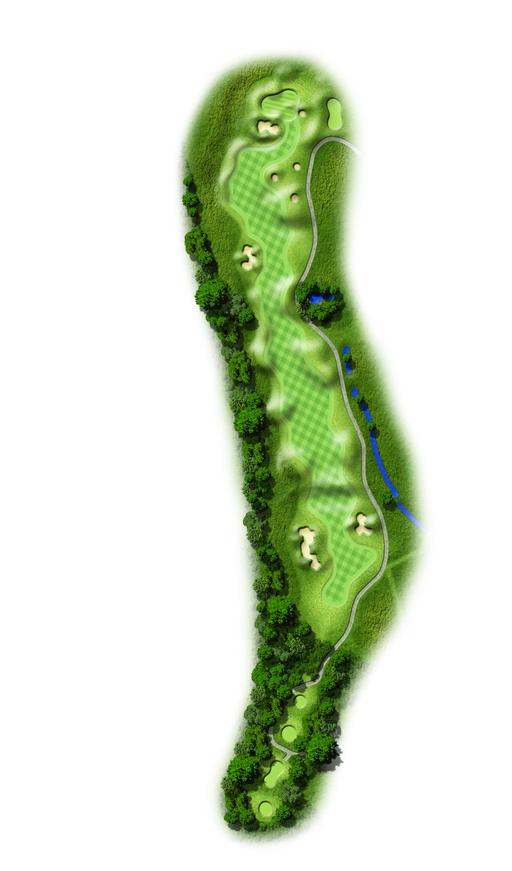 A really demanding Par 5 that will test your course management. The tee shot, which is over a valley, should be played just left of the right hand fairway bunker.

Your second should be played left of the trees being careful to avoid the fairway bunker on the left. This will leave an approach shot to a raised green well protected by bunkers on both sides.

A demanding short hole that needs a well struck iron to a well bunkered wide green.

The safe shot is to aim between the bunkers which will make a regulation par fairly simple but be sure to take enough club to get to the middle of the green as anything landing short of the centre of the putting surface is likely to role back to the front. 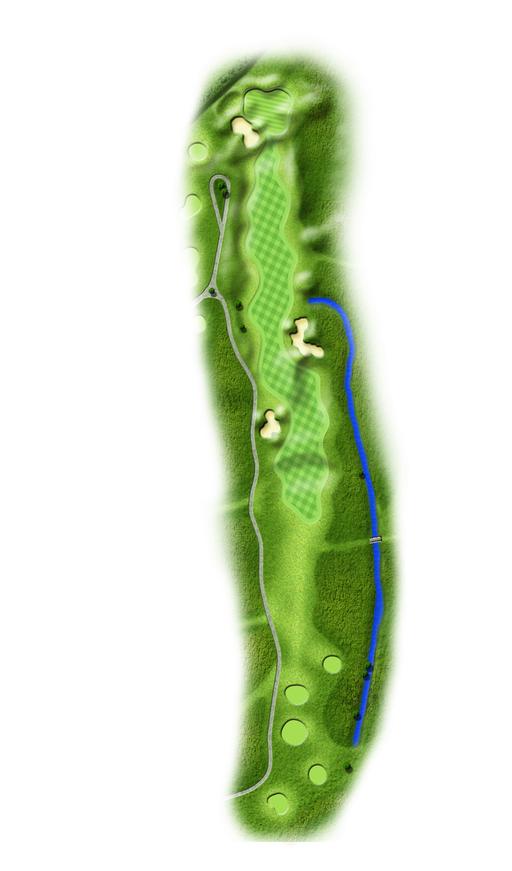 Stroke hole one and it plays it. The tee shot should be played towards the right hand bunker, this will leave a long second to a well protected green - take plenty of the club as the green is longer than it appears with a bank at the back.

Aim just left of middle to be safe as anything right of the green will be taken away by the slope. A four here is always a great score. 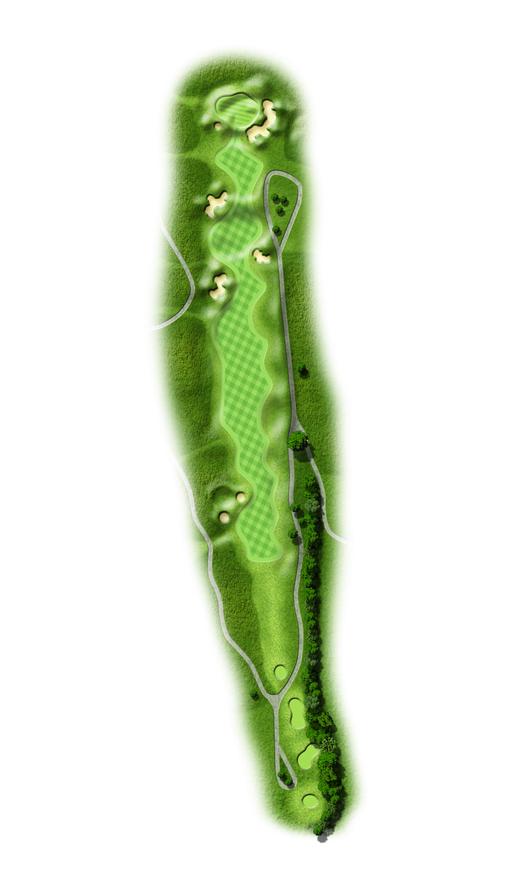 A good birdie opportunity on this par 5 if you can plot your way between the bunkers on the left and the tree on the right with your drive.

The second should be played with care to avoid the bunkers lining both sides of the fairway, this will leave you with a simple approach shot to the green and a chance to 'get one back'. 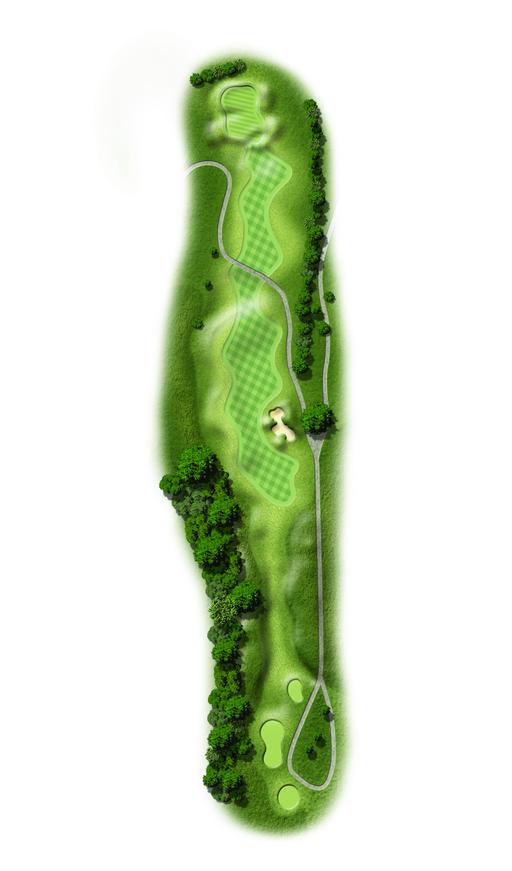 Another challenging par 4 where the tee shot needs to be played just left of the fairway bunker to open up the green.

The second should be aimed at the right side of the undulating green. Anything played too long at this green may find the OOB just through the back. 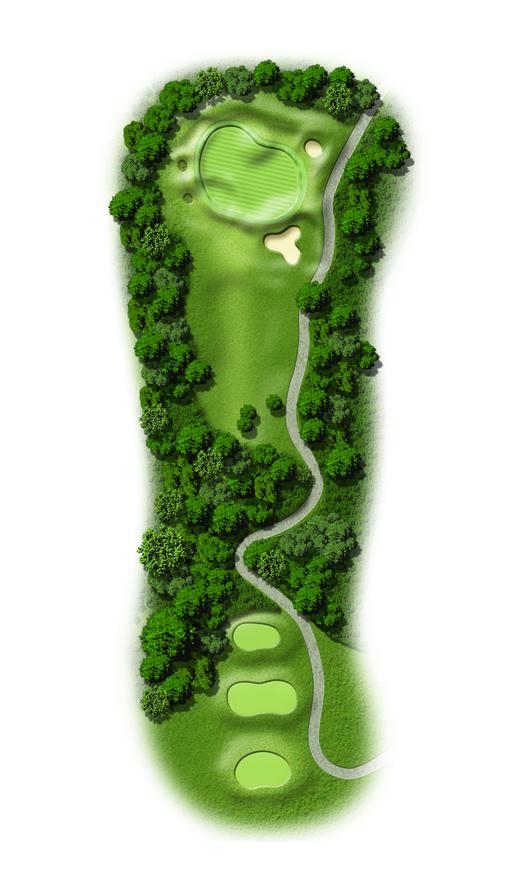 A beautiful par 3 that needs a good shot to find the putting surface.

A regulation par here is always a good score. 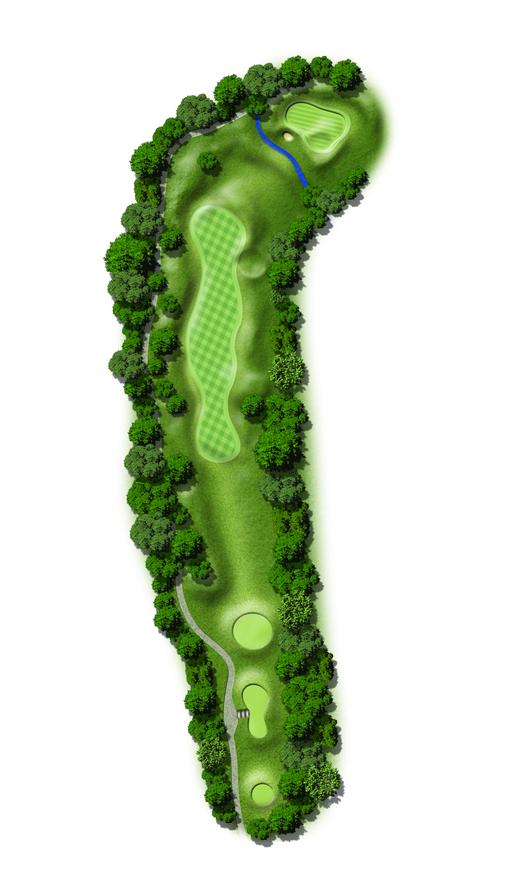 A stunning par 4 which is my favourite. The driver can stay in the bag on this one as the tee shot requires a shot that will reach the 100 yard markers which are only 190 yards from the tee but must favour the left side rather than the right.

The approach shot will be a short iron over a little stream to a fairly small flat green. 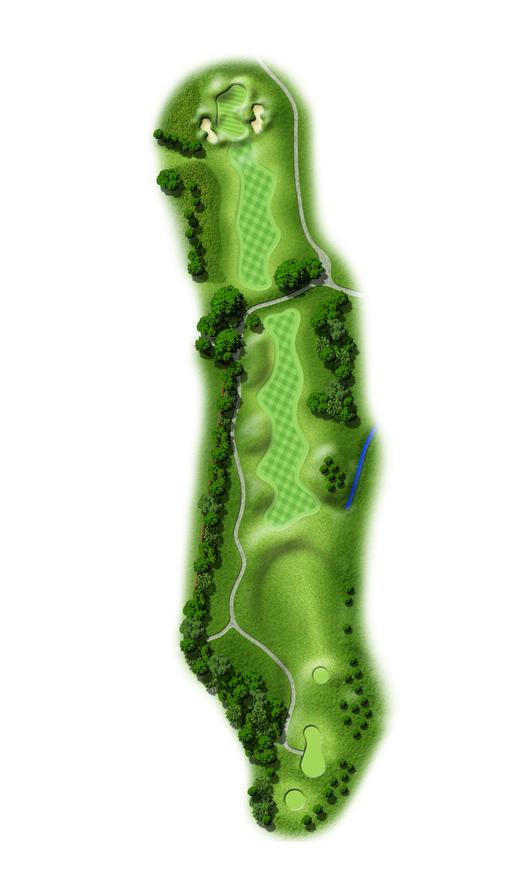 An easy par 5 to finish where long hitters can get home in two.

The drive should be straight towards the clubhouse, avoiding the OOB on the left.

The second shobbbbt should be played carefully through the gap between the trees and towards the green.

If you reached the green you will be left with a simple pitch to a big green with bunkers on either side.